Gloomhaven Helper is the officially licensed companion application for playing the Gloomhaven board game and Forgotten Circles expansion, without losing the board game feel. It tracks initiative, monsters, and characters so you can focus on playing the game rather than bookkeeping. Playing the game becomes faster, as does setup and tear down.

Gloomhaven Helper eliminates the need for the following Gloomhaven components: 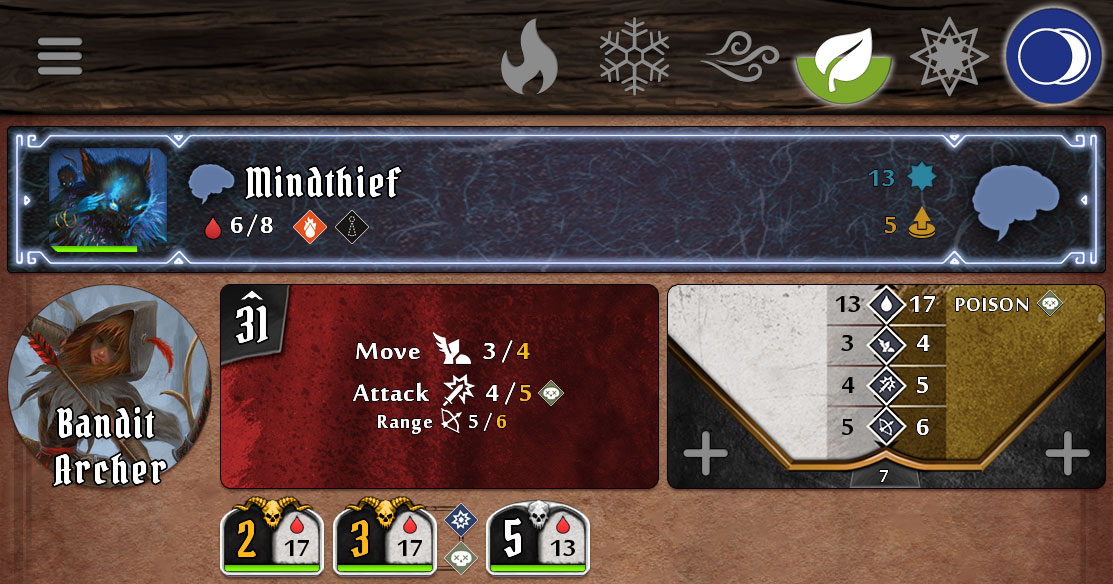 Check out the gallery to see Gloomhaven Helper setups by community members! 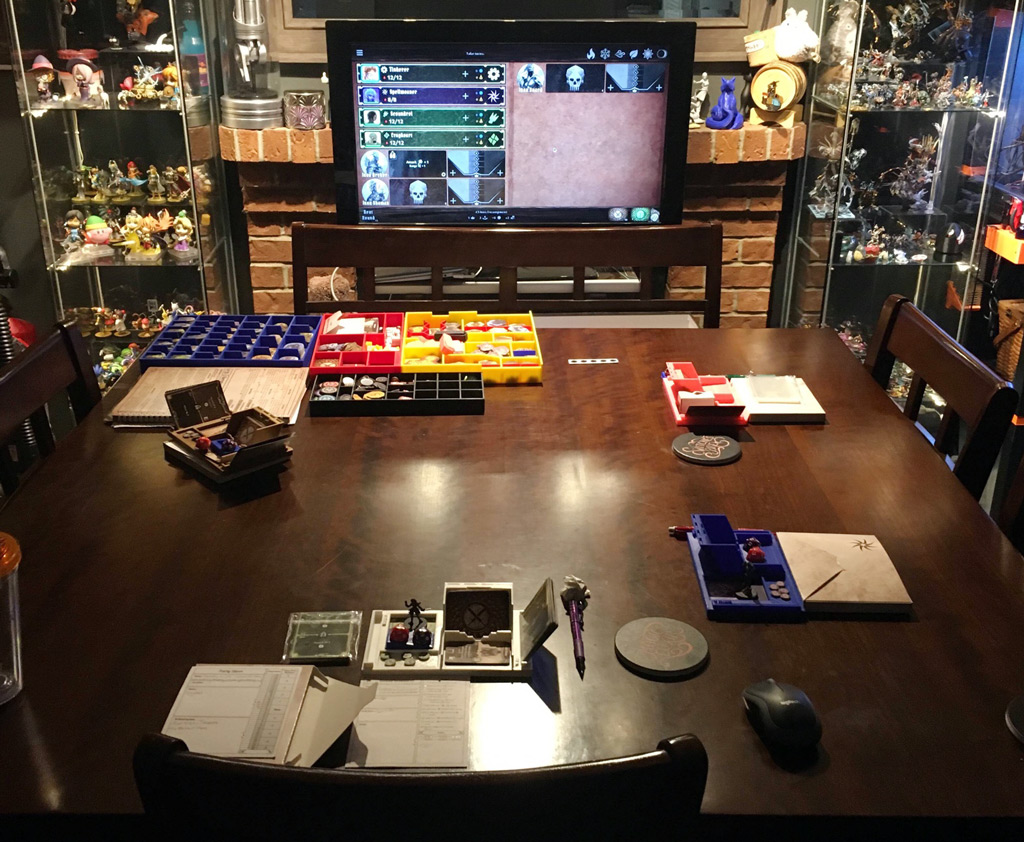 Gloomhaven Helper can be installed from the Apple app store.

To run the desktop version, Java 8 is required. If you don't want to install Java, you can go to this page, click the radio button to accept the license agreement, then click to download the .tar.gz for your OS (Windows x64, macOS, or Linux x64). Decompress the file (eg with 7zip or via the command line) and you'll end up with a simple folder full of files. You can run Java out of that folder without needing to install anything -- no Java updater, no Java browser plugins.

To run Gloomhaven Helper from the command line on Windows use:

If you get an error about Error: Unable to access jarfile ghh.jar, it means Java can't find the ghh.jar file. Either change directory to where the JAR file is (the cd C:\path-to-gloomhaven-helper shown above) or use an absolute path to the JAR file, for example:

If you get an error about UnsupportedClassVersionError, it means your version of Java is too old. You need Java 8+. If you have installed Java 8+ and continue to get the same error, likely you still have an older Java version on your path. You can check using java -version. Try specifying an absolute path to the newer Java installation, for example:

You can use Gloomhaven Helper in a web browser here. This version is identical to other platforms, except it does not support network synchronization.

When the app first loads, you will need to add character and monster rows by clicking the menu in the upper left of the app. You can set a scenario by number to add the required monsters automatically.

Next, spawn the monsters in the first room by clicking the + buttons.

Each round, you first choose two character ability cards from your hand, then click Draw in the bottom left corner of the app. This causes the monsters ability cards to be shown and the monster rows are automatically sorted in initiative order.

Next, move the character rows to the correct place in the initiative order by dragging the portraits, then take turns starting at the top row. As each turn completes, you may optionally click that row's portrait to gray it out.

When all turns are finished, click `Next Round` in the bottom left corner of the app. 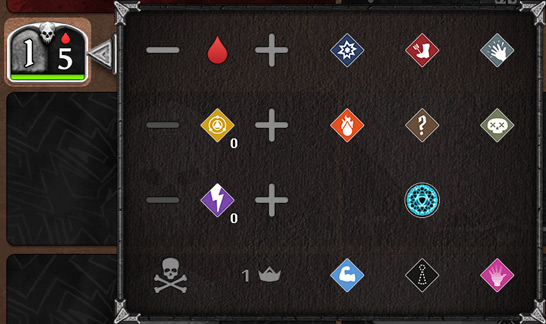 Clicking a monster box or character row opens a menu for adjusting the HP, XP, loot, blesses, curses, and conditions. You can drag left or right on the HP, XP, or loot buttons to adjust them more easily.

A faster way to adjust the HP without opening the menu is to simply drag left or right on a monster box or character row.

The summon icon indicates the monster was summoned, so should not drop a coin when it dies. The summon icon has an X on it to indicate it was summoned this turn and should not perform any actions. The X is automatically removed at the end of the current round. It is also convenient to lay summoned monsters on their side for the first turn they are in play.

Click the level icon (the crown) to open the monster level menu where the level and HP can be adjusted:

The level icon for a character opens the character level menu where the name can be set and the level and HP adjusted:

The plus icon on a character row opens the summon menu:

To add a summon, choose the color then the standee number. Afterward you can set the HP, movement, attack, and range. 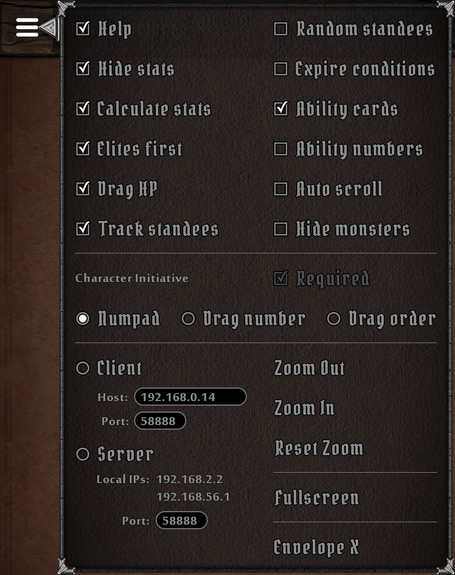 This setting scales the app up or down. Zooming out can provide more vertical space and reduce or remove the need for scrolling. When there is sufficient horizontal space and more rows than fit vertically, Gloomhaven Helper will arrange the rows in two (or more) columns.

On the desktop you can zoom using the up or down arrow keys. 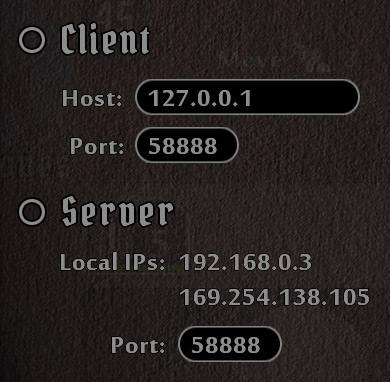 By having one device (cell phone, tablet, laptop, desktop, etc) run a server inside the app, other devices can connect to it so Gloomhaven Helper is synchronized across all the devices. Any changes made on any of the devices will appear on all the others. Any number of clients can connect to a server.

The server and all clients must be on the same version of Gloomhaven Helper. You can see the version at the bottom of the main menu. The devices can be on different operating systems (eg, Android devices can connect to an iOS server and vice versa).

The app uses standard TCP sockets to communicate. The server and clients can be on different networks or across the internet, but you will need to configure your router that the server is behind to forward incoming connections to the device running the server.

Clients must be on the same network for automatic server discovery, otherwise you will need to enter the IP address of the server manually. Also, even if they are on the same network, some routers block automatic discovery. The app shows the server's IP (there may be multiple), otherwise you can find its IP in your device settings or your router's administration page.

If your clients are on the same network but still unable to connect to the server, it is almost certainly a problem with your network configuration or the devices themselves. If you are using a "guest" WIFI or your WIFI has "wireless isolation" enabled, it will block connecting to the server. Some devices have poor networking hardware and may need to be rebooted.

Synchronization is done by sending the entire game state any time there is a change. Receiving a new game state causes menus to close, so many groups designate a single person to make most of the changes.

A good resource to resolve problems is BoardGameGeek's Gloomhaven subforum or Reddit's r/Gloomhaven. If you are still really stuck, you can send an email, but please allow a few days for a response.

The following features may be considered in the future:

If you are interested in how Gloomhaven Helper came to be, check out these links:

This app was developed as a fun side project. Initially all versions were provided for free because not having paid customers is pretty great: there is no obligation for work, maintenance, or support and no guilt if those are lacking. However, many people requested further development. One year later, to justify spending more time and effort on the app, ads were added to the Android version with an in-app purchase to remove them and a paid iOS version was released. That should be sufficient and no one needs to feel obligated to do more, just giving a 5 star rating and a nice review on Google Play would be great. If you would still really like to give extra, you may donate with a debit/credit card using this form:
Donation amount: USD
Alternatively, you can donate via PayPal. Your support is appreciated very much!

• Timer for how long players have been choosing cards.
• Setting to scroll to the row for the current turn.
• Checkbox to not add monsters when setting the scenario.
• Setting to not show monsters ability cards.
• Crash fixes.
• Updated Google libraries (Android).

• Improved zoom reset behavior.
• Ooze "Split" can only be used once per round.
• Fixed some crashes.
• Added message when network sync rejects a change.

• Added "Split" button for Ooze (also applies wound damage and respects stun).
• Added "Hide monsters" setting for seeing only players on a device.
• Added "Drag HP" setting to disable drag HP adjustments.
• Less change of a conflict when adjusting monster HP with network synchronization.
• Zoom level is now saved.
• Click the scenario info to change the scenario level.
• Fixed removing a monster box while it is moving.
• Fixed layout issues on narrow width screens.
• Minor performance improvements.
• Remove monster button no longer prompts.
• Fixed monster menu not showing in the correct position.
• Fixed "Drag number" initiative not updating other clients.
• If the game state cannot be loaded, it is no longer erased (until a change is made!). The app can be restarted to try loading the data again.

• Fixed a few crashes.
• Reduced memory usage slightly.
• End of round ad reduced to every 3rd round and not more often than 20 minutes.

• Fixed undo/redo when using network synchronization.
• Fixed character "+" button highlight.
• Choosing "Remove Ads" when already purchased really is fixed now.
• End of round ad reduced to every other round.

• Fixed attack on Inox Bodyguard ability cards.
• Fixed undo/redo crashes.
• Ads on Android with an in-purchase to remove them.
• Released on iOS.

• Faster network synchronization when dragging to adjust values.
• Added 25 levels of undo.
• Added redo.
• Keyboard entry for initiative (desktop).
• Escort and objective initiative is not reset each round.
• Fixed recommended scenario when an escort or objective is in the party.

• Fixed an incorrect boss immunity.
• Renamed "Players" to "Characters".
• "Set scenario" defaults to the last scenario level rather than using the characters level.
• Don't keep screen on while app is in the background.
• Escort and Objective moved to top of list.
• Monster rows share ability decks when appropriate.
• Scroll to top on draw and next round.

• Fixed monster stat layouts.
• Fixed zoom from being lost when window is minimized on desktop.

• Removed "Summon" as a monster that can be added.
• Fixed crashes adding escort or objective.
• Fixed other rare crashes.

• Ability cards are back to being shown automatically when a new monster is added (summons draw for initiative, even if they don't take the action).
• Fixed minor layout problem with 2 columns.
• Smoother progress bar when loading web version.

• Added character summon tracking.
• Fixed character row highlight when menu is open.
• Fixed crash with monster remove menu.
• Fixed state not being saved locally when received from network sync.
• Write config and state to a temp file, only replacing the real file when writing is successful.
• Added logging to a log.txt file on desktop.
• Ability cards are no longer shown automatically when a new monster is added (it may be summoned and takes no action this turn). Click the ability card back to draw.
• Fixed bugs with character initiative number sorting.

• Press on stats to show them.
• Improved HP drag adjustment to prevent mistaps.

• Landscape support (multiple columns, if they fit).
• Never upscale, only downscale if the screen isn't wide enough.
• The "Zoom" setting now downscales instead of adding black bars.
• When "Track standees" is unchecked, drawing monster ability cards can be on/off.
• Other minor fixes and improvements.

• Much better legibility for HP text.

• Added summon condition for the 1st round in play to indicate it should not take actions.
• Added "Random standees" setting.
• Ending a turn by clicking a portrait ends all turns of rows above.
• Undoing a turn by clicking a portrait again undoes all turns of rows below.
• Fixed a Flame Demon card text.
• Fixed scenario level with network sync.
• Fixed swiping to set monster HP.
• Improved sliding animations.
• End of round warning is only shown when expiring conditions are active.

• Fixed resource clean up after using client or server settings.

• Clients attempt to automatically connect to the first server found running on the LAN.
• Local IP is shown when server is started.
• Special case for scenario #67.
• Better sorting for conditions on popup menus.