The Raptor project demonstrates the use of weighted meshes and IK. It also employs techniques to give the skeleton a more 3D look. Below, we focus on the skeleton setup. 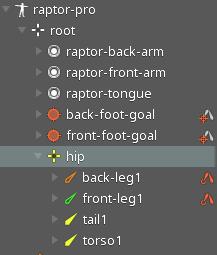 The hip bone is the root of the raptor's body bone hierarchy to which the legs, tail, and torso are attached. The hip bone serves as a control bone with which we can adjust the entire raptor body.

The vertices of the thigh mesh attachments are weighted to the the hip bone, in addition to the bones making up the raptor's legs. This helps to keep the vertices at the edge of the meshes in the correct place when the hip bone is rotated.

The raptor's front and back legs are setup in the same way. For brevity, we will only discuss the front leg in detail. The leg is driven by two IK constraints: front-leg-ik and front-foot-ik.

These two IK constraints target bones outside the raptor body bone hierarchy: front-foot-goal and front-leg-goal. Moving the target bones will cause the IK constrained bones to follow. This allows us to easily bend the leg or bend the heel.

At the tip of the leg, we have the front-foot1 bone and its child bone front-foot2. We disabled Inherit Rotation for front-foot2 to ensure the foot doesn’t go through the ground when rotating its parent bone.

The front-leg1 bone is the only bone in this leg bone hierarchy that has a slot containing an attachment. The vertices of the raptor-front-leg mesh attachment are weighted to the the leg bones, deforming smoothly when the bones are transformed.

The upper body of the raptor is composed of a single mesh attachment raptor-body. Its vertices are weighted to the bones making up parts of the upper body, like the torso and the tail.

The jaw is represented by the raptor-jaw mesh attachment. Like the thighs of the raptor, the vertices around the pivot of the jaw have been weighted to the head bone. This ensures that the jaw does not look disconnected from the rest of the head when it is rotated.

To give the jaw a 3D look, the jaw bone contains another bone called jaw-inside which contains a copy of the raptor-jaw mesh. The mesh is scaled down and tinted to be slightly darker than the front of the jaw. Note that the tongue of the raptor is drawn between the two jaw attachments. 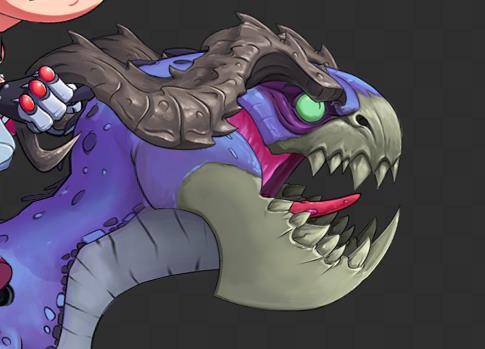 Moving the horn bones horn-front and horn-back independently from each other adds a slight 3D effect to the head, making it appear as if the head is rotating side to side.

The horn bone hierarchy also contains the spineboy-back-arm-goal and spineboy-front-arm-goal bones to help ensure Spineboy always has a good grip on the horns. 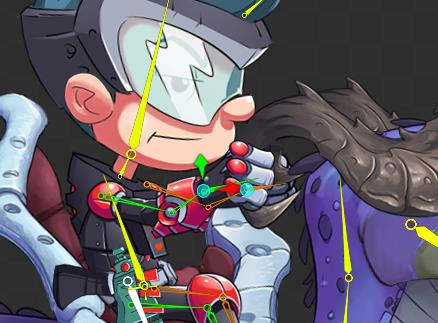 Spineboy's hip bone spineboy-hip is attached to the saddle bone on top of the raptor. Transforming the hip bone will move Spineboy's body, while four IK constraints, one for each leg and hand, are used to keep Spineboy's feet in the stirrups and his hands on the raptor's horns.

The two IK constraints spineboy-front-arm-ik and spineboy-back-arm-ik place Spineboy's hands on the IK targets back-arm-target and front-arm-target, which are attached to the raptor horns. The spineboy-front-arm-ik constraint drives the front-arm and front-bracer bones, while the spineboy-back-arm-ik constraint drives the back-arm and back-bracer bones. Since Spineboy is holding the raptor's horns in most animations, the IK constraint Mix values are set to 100% in setup mode.

To disable the influence of the IK constraints, their Mix values are set to 0% on frame 0 of the gun-grab animation. 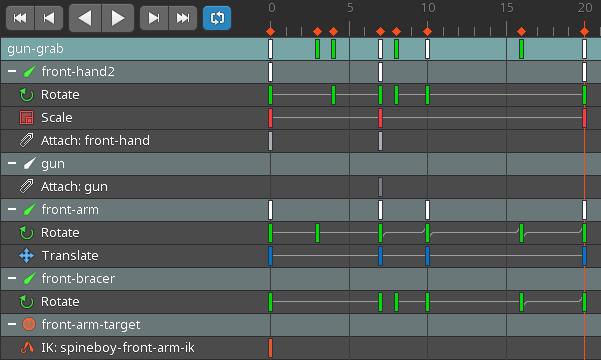 The gun in the holster is an attachment in the gun slot. When Spineboy grabs the gun, that attachment is hidden while the front-hand slot is switched to an image of the hand holding a gun. This happens in frame 7 in the Attach: gun and Attach: front-hand timelines.