Skin constraints are a great way to increase the expressiveness of your skeletons. In this blog post we'll explore how to use skin constraints to alter the proportions of a character using the Mix-and-match example project.

The goal of this exercise is it to create a skin variation that not only affects the set attachments, but also the proportions of the character. Specifically, we want the skin to make the character smaller. The technique described below can of course also be applied to create taller, skinnier, or fatter characters, and anything in between.

Let's get started! With a change in proportions, the location of the hips also changes relative to the root of the character. This can be done via a transform constraint.

Select the hips bone and create a new transform constraint with the root bone as target. Call the constraint small-hips. 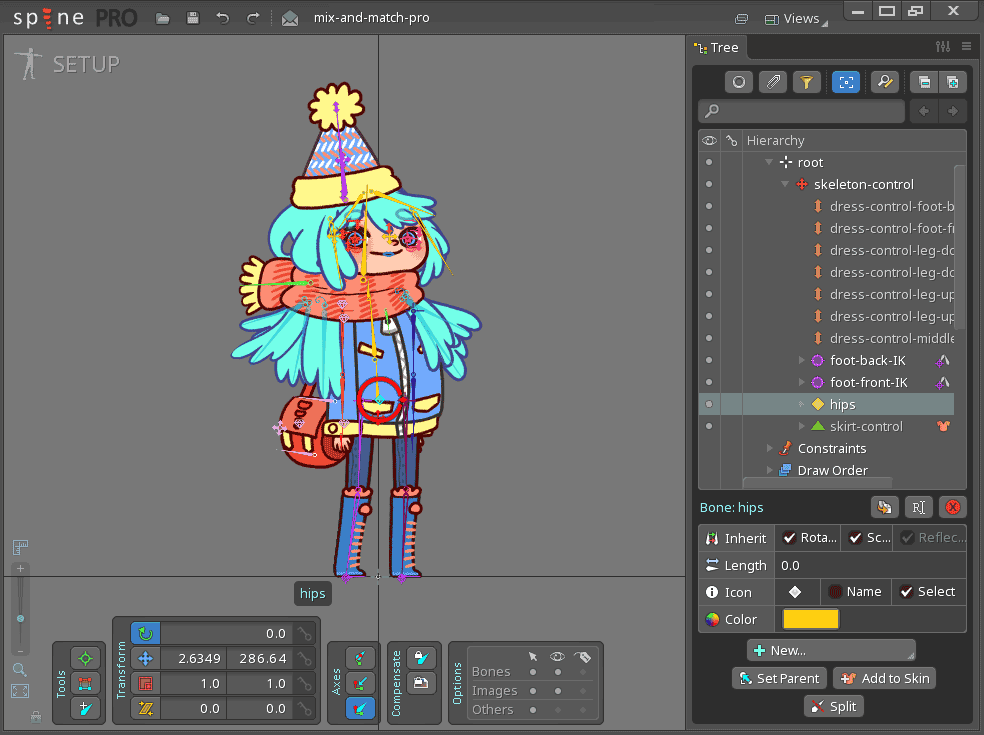 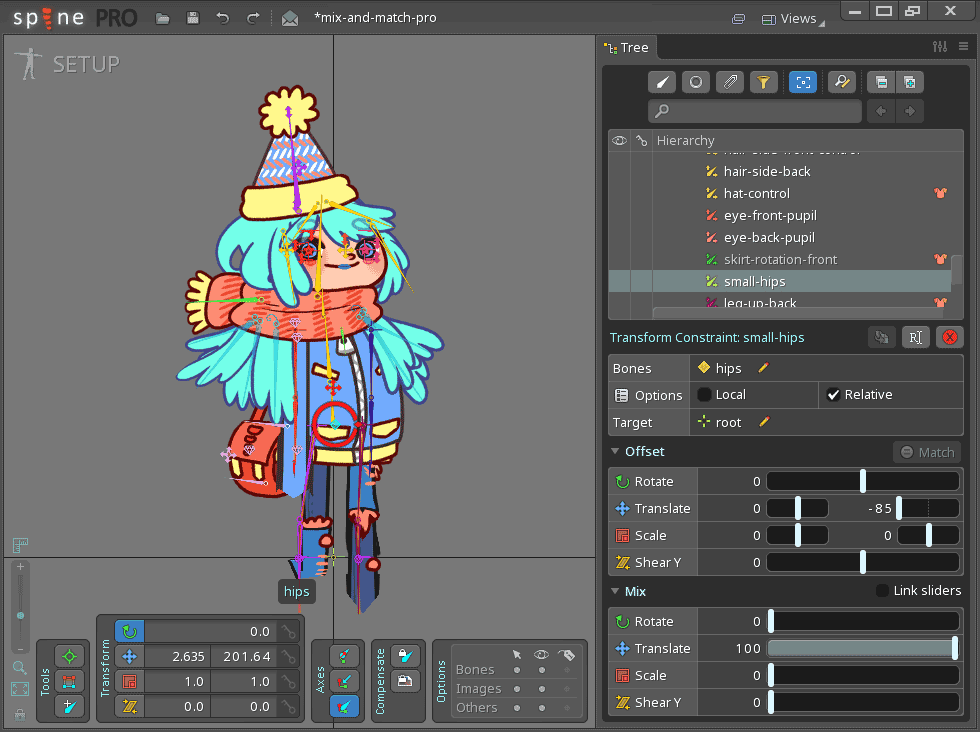 To see the effect of the constraints, modify the translate offset on the small-hips constraint, e.g. set it to -85 on the y-axis to make the character squat. 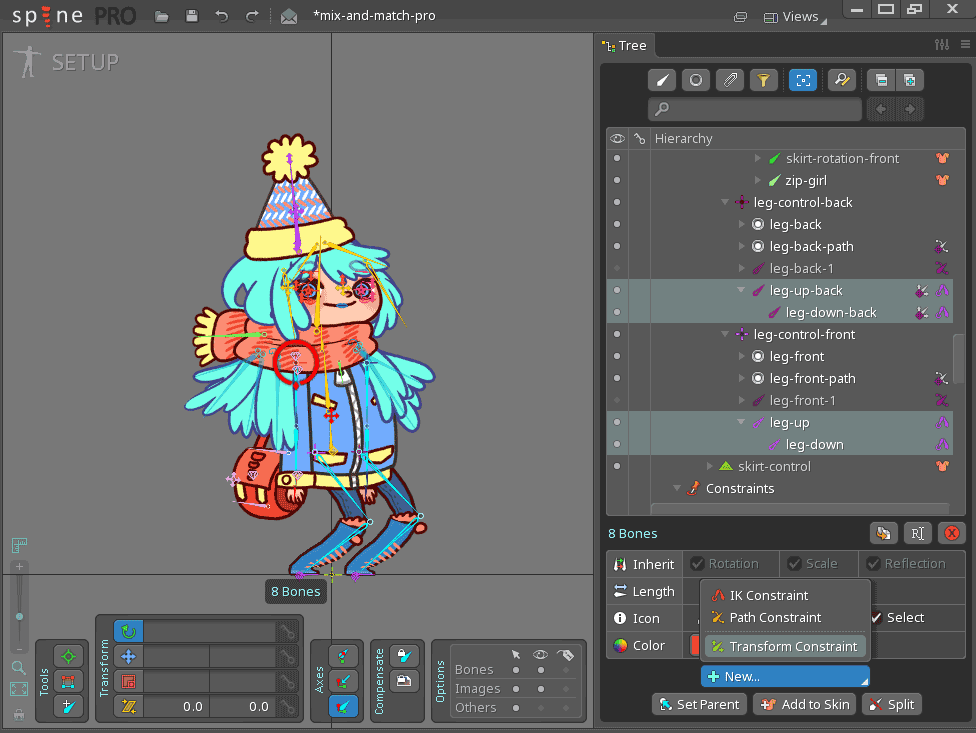 Next, create a new transform constraint called small-limbs with the root bone as its target.

In order to make these 8 bones smaller, check the Local option and set the scale mix to 10.7. We can then set the offset scale value on the x-axis such that the character's legs straighten out. A value of -2 works nicely. 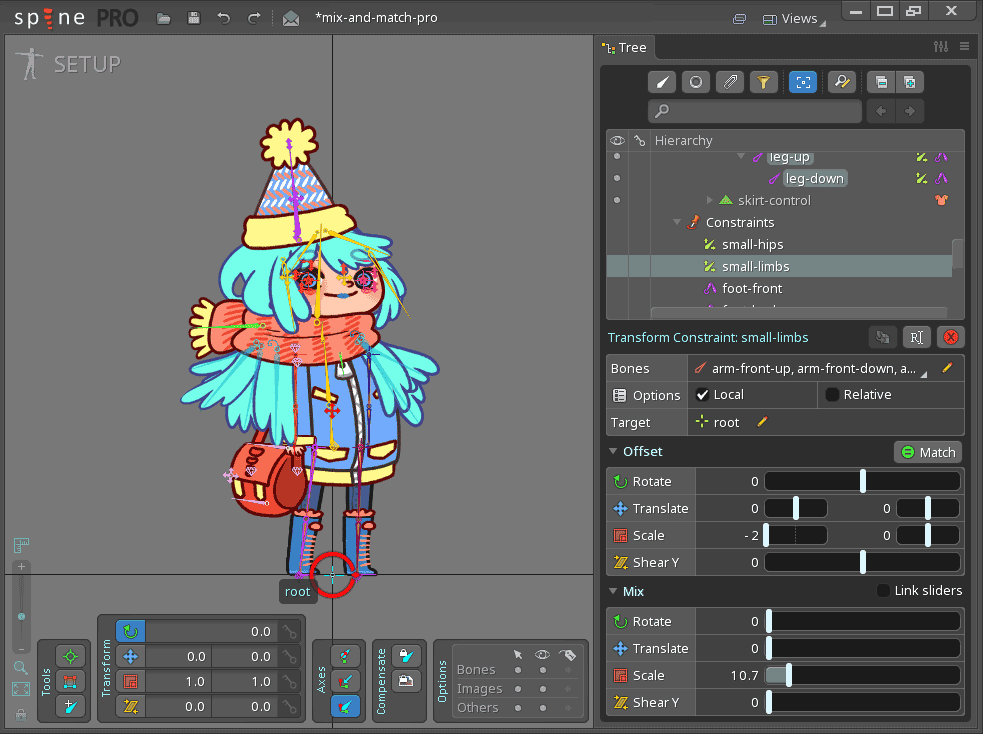 We can now add the small-hips and small-limbs constraint to a skin, which means the constraints will only be applied when that skin is active.

Create a new skin and name it small. Drag and drop the small-hips and small-limbs constraint nodes to the small skin under the Skins node.

Alternatively, first select the small skin, press the Add to skin button, select the constraints small-hips and small-limbs, then press the button Add to skin again to complete the process. 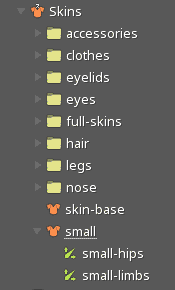 To create a tall, skinny, or fat variation, simply repeat the above process. Each variation will require its own constraints and skin. Multiple skins can be active at the same time using the Skins view, so you can combine skins that change proportions with other skins that change attachments. You could even have separate skins for changing the proportions of the legs, arms, torso, etc and combine them however you like.

This simple technique can be applied to more than just proportions! It is a powerful way for skins to affect not just which attachments are visible, but the skeleton's bone transforms.